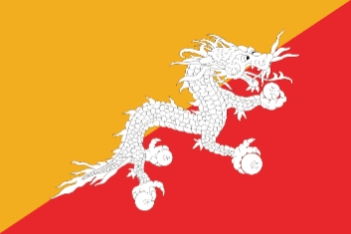 The Kingdom of Bhutan, is a landlocked nation in South Asia, located at the eastern end of the Himalaya Mountains and is bordered to the south, east and west by the Republic of India and to the north by People's Republic of China. Bhutan is separated from the nearby state of Nepal to the west by the Indian state of Sikkim, and from Bangladesh to the south by West Bengal. The Bhutanese call their country Druk Yul which means "Land of the Thunder Dragon”. 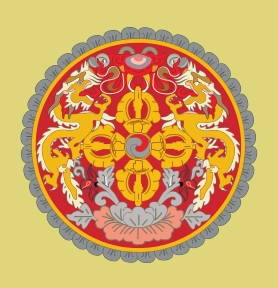 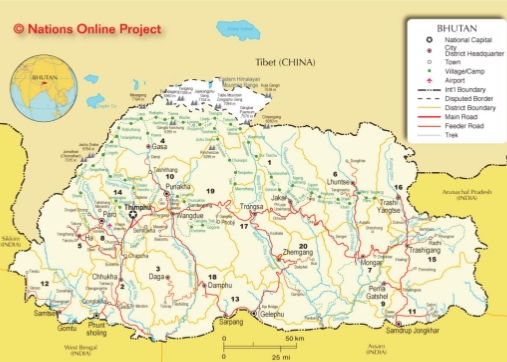 In the Thunder Dragon Kingdom, where
cypresses grow Refuge of the glorious
monastic and civil traditions,
The King of Druk, precious sovereign,
His being is eternal,
his reign prosperous The enlightenment
teachings thrive & flourish
May the people shine like the sun
of peace & happiness!

The northern region consists of an arc of glaciated mountain peaks with an extremely cold climate at the highest elevations. Most peaks in the north are over 23,000 feet (7,000 m) above sea level; the highest point is claimed to be the Kula Kangri, at 24,780 feet (7,553 m), but detailed topographic studies claim Kula Kangri is wholly in Tibet and modern Chinese measurements claim that Gangkhar Puensum, which has the distinction of being the highest unclimbed mountain in the world, is higher at 24,835 feet (7,570 m).The lowest point is in the valley of Drangme Chhu, where the river crosses the border with India. Watered by snow- fed rivers, alpine valleys in this region provide pasture for livestock, tended by a sparse population of migratory shepherds. 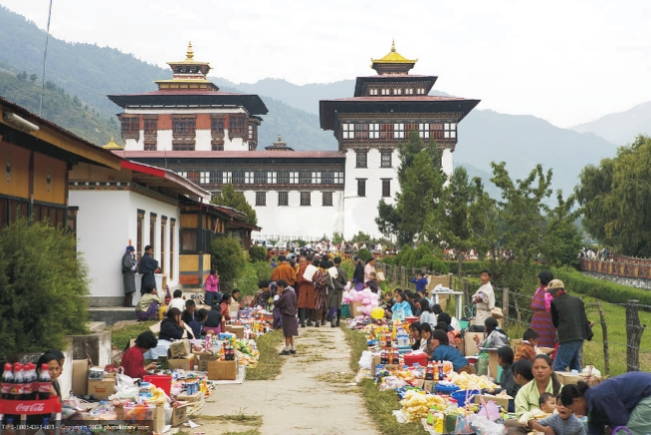 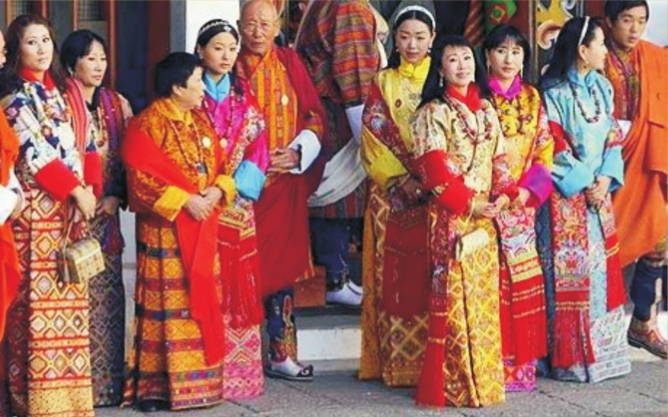 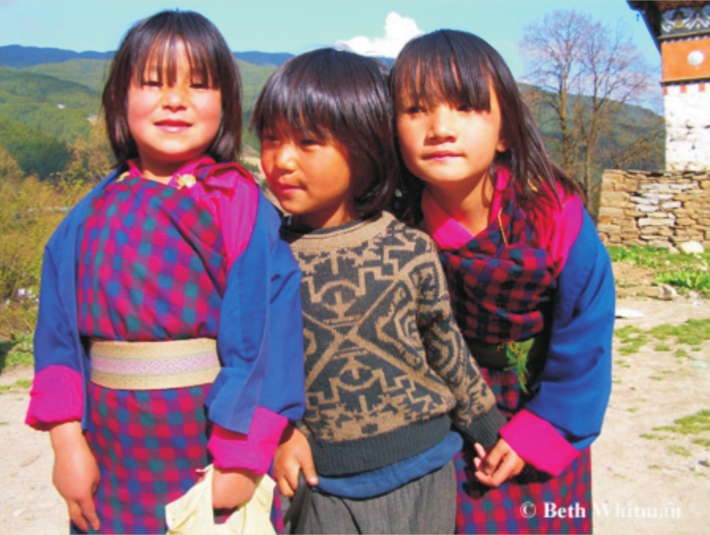 Bhutan 'The Land of Thunder Dragon', to renowned for its undiluted culture and unspoiled nature wonders. Bhutan's past is still its present and it religion, still a way of life.

Bhutan has a rich and unique cultural heritage that has largely remained intact due to its isolation from the rest of the world until the early 1960s. One of the main attractions for tourists is the country's culture and traditions. Bhutanese tradition is deeply steeped in its Buddhist heritage. Hinduism is the second dominant religion in Bhutan, being most prevalent in the southern regions. Both religions co-exist peacefully and receive support from the government, and enjoy royal patronage. The government is increasingly making efforts to preserve and sustain the current culture and traditions of the country. Due to its largely unspoilt natural environment and cultural heritage, Bhutan has been referred to as The Last Shangri-la. While Bhutanese citizens are free to travel abroad, Bhutan is viewed as inaccessible by many foreigners.

Bhutan's architectural forms are quite diverse, chortens, stone walls, temples, monasteries, dzongs-fortresses, mansions, houses make up a unique and awesome architectural landscape. The characteristic style and colour of every building and house in the kingdom is a distinct source of authentic pleasure and an apt display of traditional splendor. 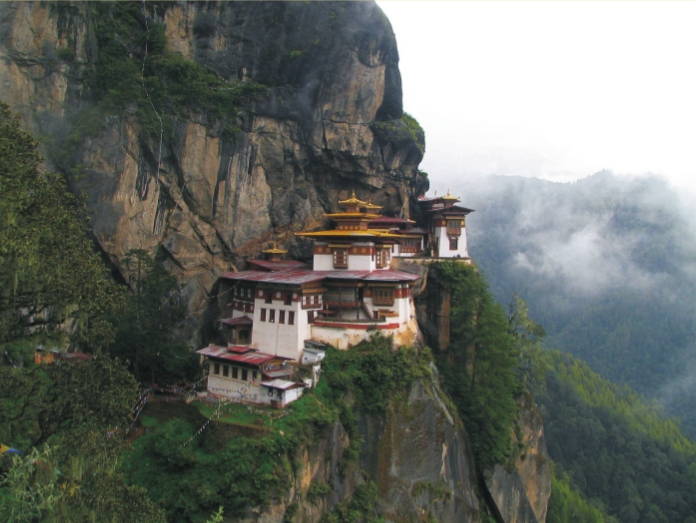 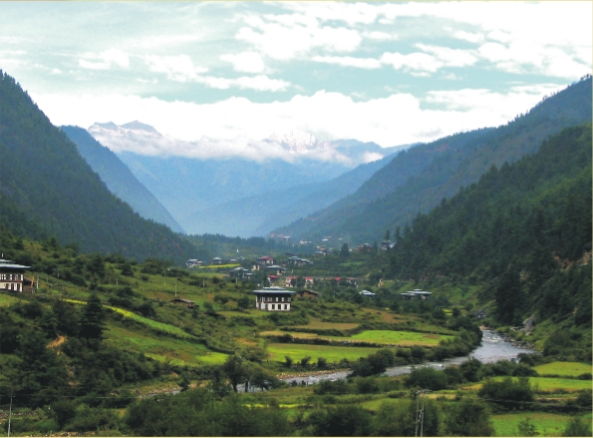 Dzongs, Bhutanese fortresses, were constructed at strategic points. They contain both regional monastic communities and administrative offices for the district government. A dzong consists of mainly a central tower, utse, built in the midde of the courtyard with monk cells and administrative offices backed up against the walls that surround it. However, some dzongs have two separate courtyards. These structures are built on a grand seale without the help of any drawings and held without a single nail; the solidity and elegance of the sloping walls, combined with richly detailed woodwork and the ethereal character of the pitched roof make them outstanding examples of the best in Bhutanese architecture.

The woman attire consists of a kira, a simple rectangular cloth that is wound around the body, secured at the shoulders by two silver clasps and gathered in at waist by a wide belt, onju-blouse over which the tyogo, a white jacket is worn. A mans kho is cut some what like kimono and reaches the ankles, It is pulled up to the knee's and fastened at the waist by a belt. Kabne, Large searves draped around the body, indicating a persons rank is worn for official occasions and visits to dzongs. Women of all ranks wear a red striped scarf called rouchu. 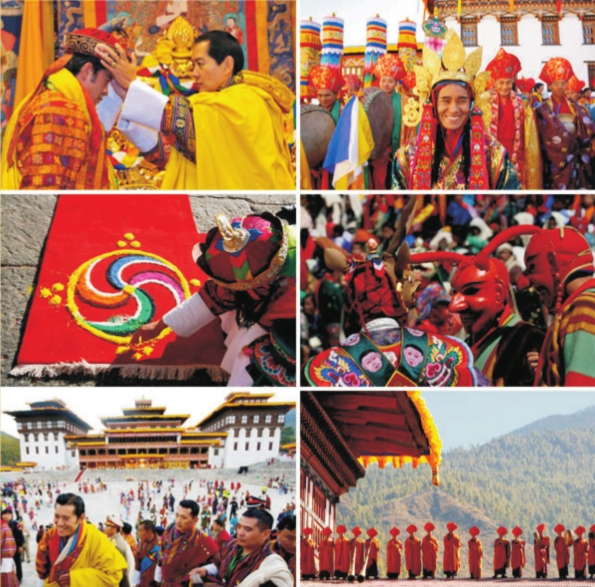 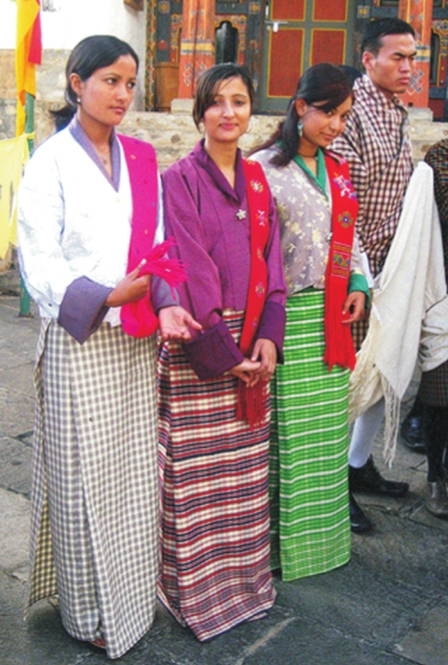 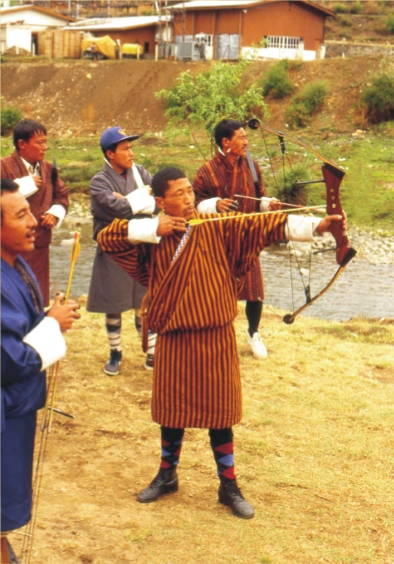 Hand woven Fabrics are the pride of Bhutan. Women weave the fabrics at home, each region producing their own specialties. The fibers used are cotton, wool, silk, yak hair, and nettle fibre which is usually vegetable or mineral dyed by the wearer herself. The material is either striped horizontal for women while vertical for men, or checkered which is unisex. All patterns have a symbolic meaning. Every fabric has a name which describes its particular combination of fibre, colour and pattern.

Bhutan has a large no. of Cham-religious dances, which fall into three broad categories, Instructive or didactic dances which are dramas with moral, dances that purify and protect a place from demonic spirits and dances which proclaim the victory of Buddhism and the glory of guru Rimpoche. Dancers wear spectacular costumes made of yellow silk or rich brocade, often decorated with ornaments of carved bones. For certain dances they wear masks which may represent animals, fearsome deities, skulls, manifestations. Of guru Rimpoche or just plain human beings. The masks are so heavy that dancers protect themselves from injury by binding their heads in stripes of cloth, which support the mask. The dancers then see through the opening of the mouth.

Tshechus, one of the best known and most colorful religious festivals, takes place once a year in dzongs and monastries to honour guru Rimpoche. It consists of up to five days of spectacular pageantrey, masked dances and religious allegorical plays that have remained unchanged for centuries. As well as being a vital living festival and an important medium of Budhist teachings, tshechus are huge social gatherings. The Bhutanese revel and rejoice together, dressed in their finest clothes and jewelry, in an infectiously convivial atmosphere where humor and devotion go hand in hand. 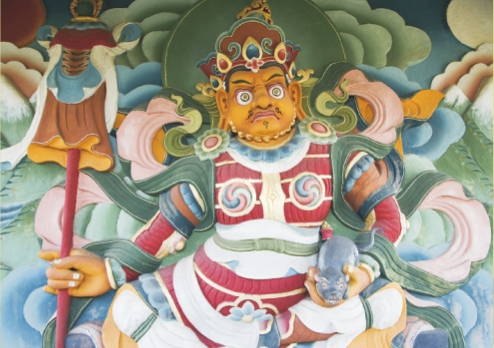 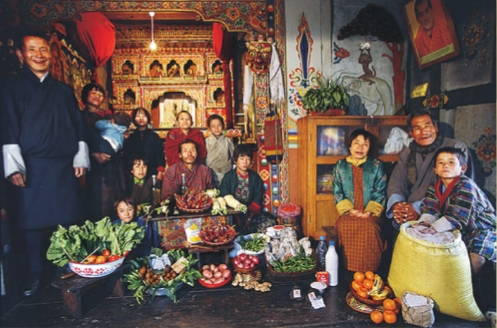 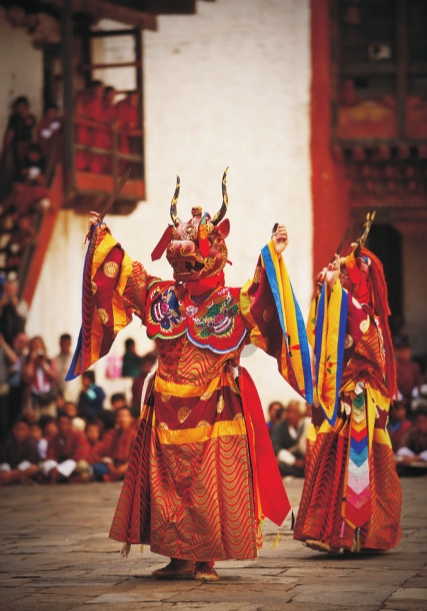 Bhutan has a wide range of Indigenous handicrafts ranging from objects fashioned from bamboo, wood and silver to many kinds of hand woven fabrics and intricate thangka paintings. Bhutanese art has three main characteristics, it is anonymous, it is religious and as a result, it has no aesthetic function by itself. As it is created for religious purposes almost all art represents the struggle between good and evil. The rules of the iconography are firmly established, each deity has its own colour and special attributes that cannot be changed without altering the meaning and the religious function.

There are no stone or rock sculpture in Bhutan, except for letters which are carved in base i.e. relief on stone walls. Completely painted clay images and metal statues of copper alloy are extremely popular, and some times silver and gold are used as metal. Most metals images and chortens are guilded and some are ornamented with coral and turquoise.

Archery, Bhutan's national sport played practically all year round. It forms an integral part of all festivities and usually accompanied by a banquet. Two teams of 11 archers compete with each others using bows and arrows made of a special kind of bamboo. There are 3 sets and the method of scoring is complicated because arrows that land within an arrow length of the target also count. Each team is encouraged by its supporters and 'cheer leaders', women who dance and sing, extolling their team while 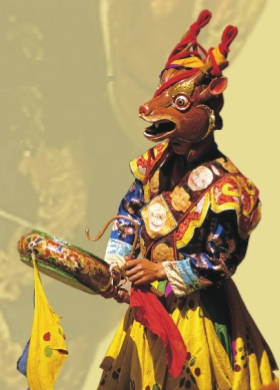 teasing and mooching the adversaries so that they might lose their concentration. The best archers wear multi colored scarves tied to the back of their belts, and each time an arrow hits the bulls eye a short victory dance is preformed by the team. Other traditional sports are Dego-a game like bowling is popular among monks, kuru an outdoor dart game and keyshey and sherey parey which are games of strength. Football, basketball and taekwando have also become very popular in Bhutan today.

A typical Bhutanese meal consists of plenty of rice and two or three dishes of various stews. The most popular dish being hemadatsi, made with large, green hot chillies served in a cheese sauce. Phagshapa, strips of pork fat often dried, stewed with radishes turnips and diced chillies, is another popular delicacy. The most noted feature of Bhutanese cuisine is the use of chillies as a vegetable rather than a seasoning. Tea is the most widely consumed beverage, but ara – a drink made from grain with about 20% alcoholic content is extremely popular in central and eastern Bhutan. There are two kinds of tea, seudja, which is tea churned with salt and butter and nadja, tea brewed with milk and sugar.