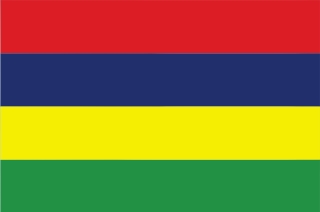 Mauritius, officially the Republic of Mauritius, French: République de Maurice, is an island nation off the coast of the African continent in the southwest Indian Ocean, about 900 kilometers (560 mi) east of Madagascar. In addition to the island of Mauritius, the Republic includes the islands of St. Brandon, Rodrigues and the Agalega Islands. Mauritius is part of the Mascarene Islands, with the French island of Réunion 200 km (125 mi) to the southwest and the island of Rodrigues 570 km (350 mi) to the northeast. Mauritius was a constitutional monarchy from its independence in 1968 until 1992, when it became a republic. The Labor Party controlled the government until 1982. Port Louis is the capital & largest, leading city of Mauritius, lies on the northwest coast of the island of Mauritius. The town was named for Louis XV, king of France. 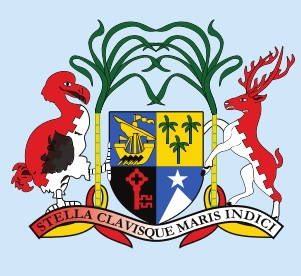 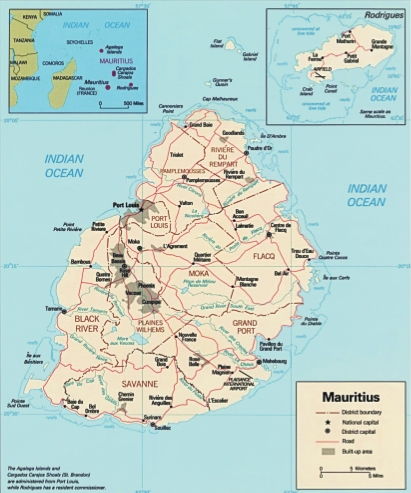 Glo-o-ory to thee,
Motherland, oh
motherland of mine,
Sweet is thy beauty,
Sweet is thy fragrance,
around thee we gather,
as one people,

as one nation,
In peace, justice and liberty,
Beloved country may
God bless thee,
for ever and ever.

The local climate is tropical, modified by southeast trade winds; there is a warm, dry winter from May to November and a hot, wet, and humid summer from November to May. Anti-cyclones affect the country during May to September. Cyclones affect the country during November- April. Hollanda (1994) and Dina (2002) were the worst two last cyclones to have affected the island. 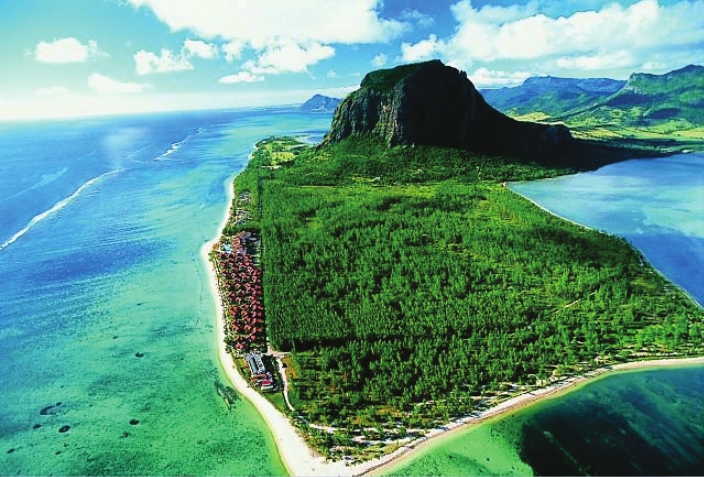 Mauritius Surrounded by the Coral Reef

Mauritius is a part of the Mascarene group of Island formed by volcanic eruption from the depths of Indian ocean. It remained in solitary isolation for countless millennia, a paradise for the legendary Dodo, the black parrot, gaint tortoises and multiple of exotic animal and plant life. The Arabs knew it as Dina Mashriq or Eastern Isle. The Portuguese, who used the island to provision their ships named it Crime, the Swan the Dutch, the islands firs settlers introduced sugarcane but also raised the black ebony forest and killed of the Dodo named it Mauritius, after prince Maurice de Nassan. The French who laid the colony on form foundations called it isle de France. It was renamed Mauritius when captured by British, who abolished slavery A large numbers of Indian Labourers were brought over to work on the sugarcane plantations and their descendants constitute the bulk of the present population. Some Chinese also came and set up shops and small businesses. The stage was thus set for the present day multicultural Mauritius, a delightful pot pourri of races, languages, customs and cultures.

Together with Réunion and Rodrigues, Mauritius is part of the Mascarene Islands. This archipelago was formed in a series of undersea volcanic eruptions 8-10 million years ago, as the African plate drifted over the Réunion hotspot. They are no longer volcanically active, and the hotspot now rests under Réunion. The island of Mauritius itself is formed around a central plateau, with its highest peak in the southwest, Piton de la Petite Rivière Noire at 828 meters (2,717 ft). Around the plateau, the original crater can still be distinguished from several mountains. Mauritius was formed by volcanoes that left the land covered with rocks and a thick layer of lava. Coral reefs surround all about the southern part of the island.

More than a third of Mauritius's income comes from the sugar industry. About 90% of its total farmland is planted with sugar cane, and almost all its exports are sugar or sugar products. 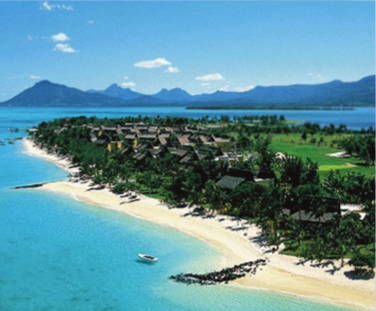 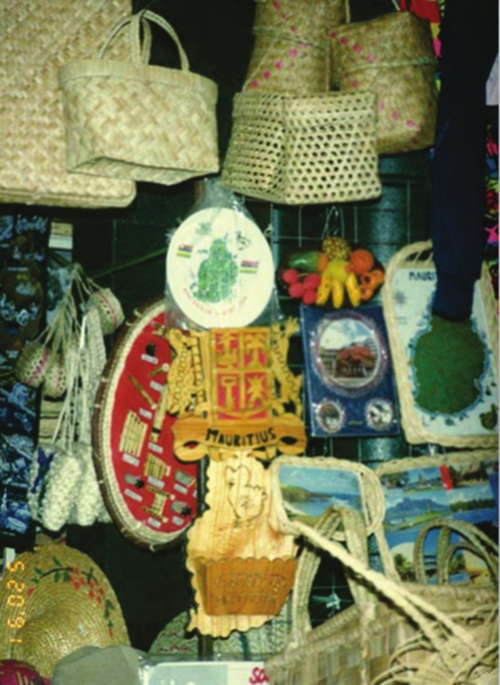 The history of Mauritius reflects in the mix of people, languages and faiths, Almost 70% of the people are of Indian descent. Almost 30% are creoles people of next European and African descent or mixed European and Indian Descent. The rest of people are Chinese and Europeans. English is the official language, but French is still used by some government officials. Most people speak creole - a French dialect. Some Indians speak one or more of the six languages and the Chinese speak one or two Chinese dialects. Dotting the island are Hindus temples, Christian churches, Muslim mosques, and Buddhist pagodas.

Mauritius is a land of variety and contrast that reflects in its buildings and in the belief of its people Dotting the island are Hindu temples, Muslim mosques, Roman Catholic and Anglican churches. And buddist pagodas. There are French colonial Mansions and thatched huts, modern sugar factories exotic resorts and antique wooden shops.

Mauritian waters are abound with large variety of fish; black and blue marlins, dorados, all types of sharks, sailfish, yellow fish tuna, wahoo, barracuda, and bonifos, among other. The big predator feeding so close to the shore has made big game fishing extreamely popular the magnificent under water scenery of coral gardens that is home to over 1000 different species of fish and sea life make scuba diving a very unique activity.

The Sega is the musical expression of the Mauritian way of life – joyous carefree and lively. The music is derived from the music of the old slave days, with added Gaeole patois lyrics. Traditional instruments like the ravane-a wooden hoop over which is stretched a piece of goats skin, coco – a percussion instrument, triangle, the traditional one string guitar create the gripping intensive beat to which the dancers sway and Shuffle. Generally danced around a campfire with women in bright printed flowing skirts the dancers give full vent to their emotions. The Sega in not only popular today with the peasants and fishing folk but now provides entertainment to Mauritians of all walks of life. It has integrated itself within the frame work of Mauritian folk lore. 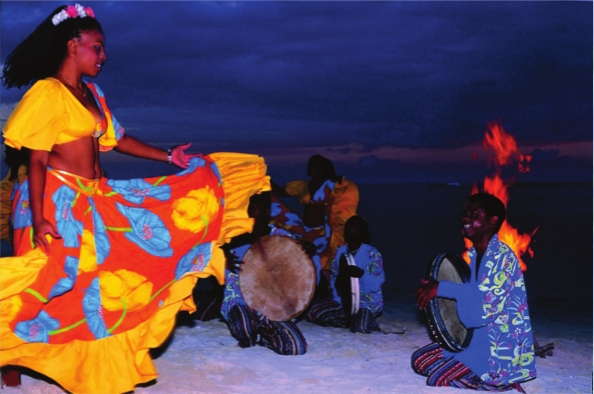 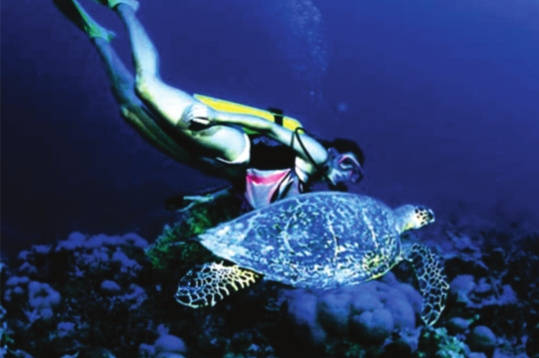 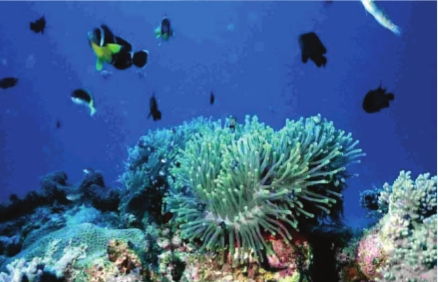