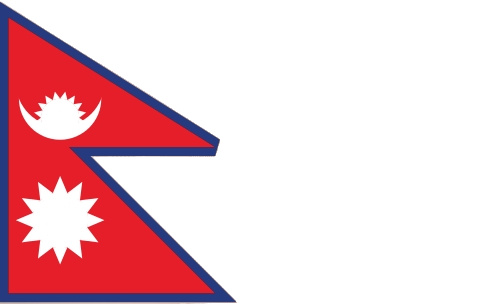 Nepal, officially the Federal Democratic Republic of Nepal, is a landlocked country in South Asia and is the world's youngest republic. It is bordered to the north by the People's Republic of China, and to the south, east, and west by the Republic of India. With an area of 147,181 square kilometers and a population of approximately 30 million. Kathmandu is the nation's capital and the country's largest metropolitan city. Nepal is a country of highly diverse and rich geography, culture, and religions. The mountainous north contains eight of the world's ten highest mountains, including the highest, Mount Everest. The fertile and humid south is heavily urbanized. By some measures, Hinduism is practiced by a greater majority of people in Nepal than in any other nation. 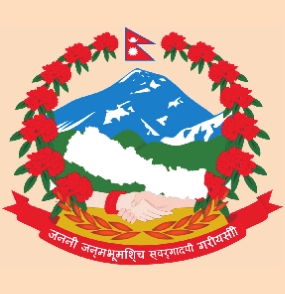 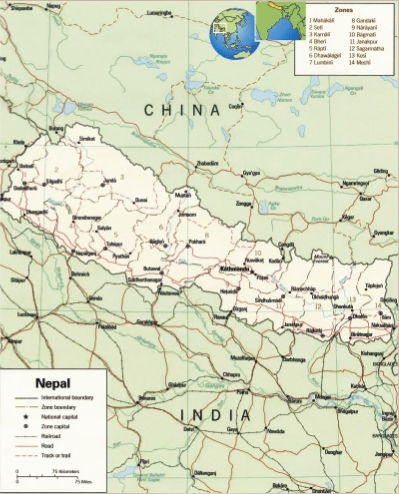 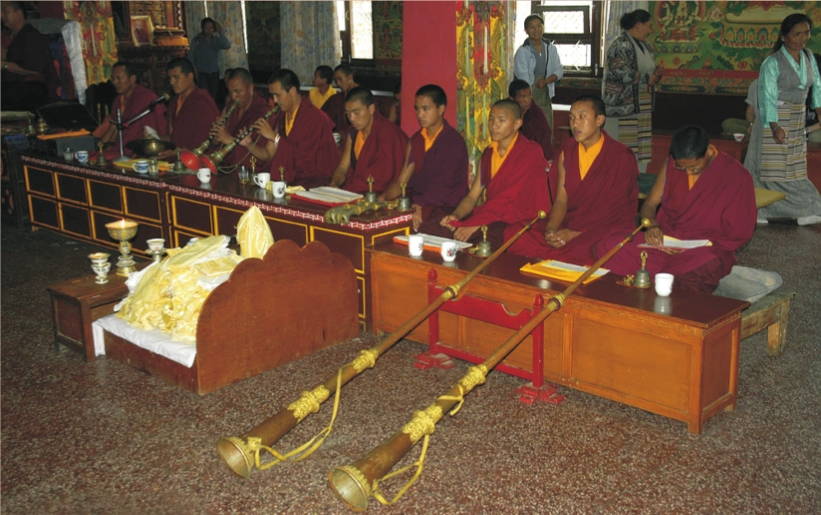 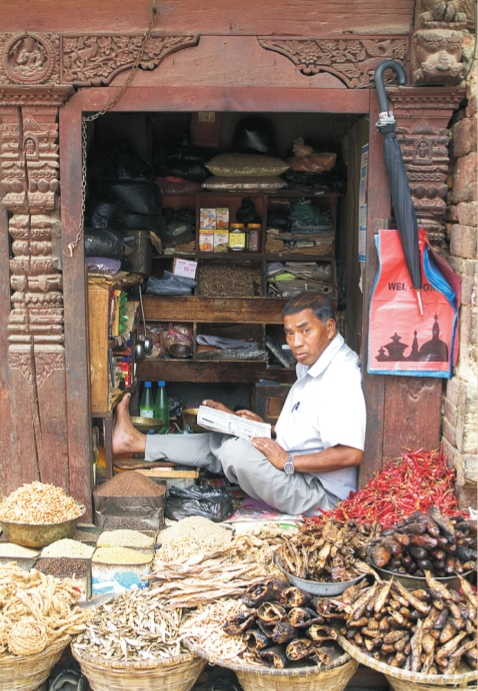 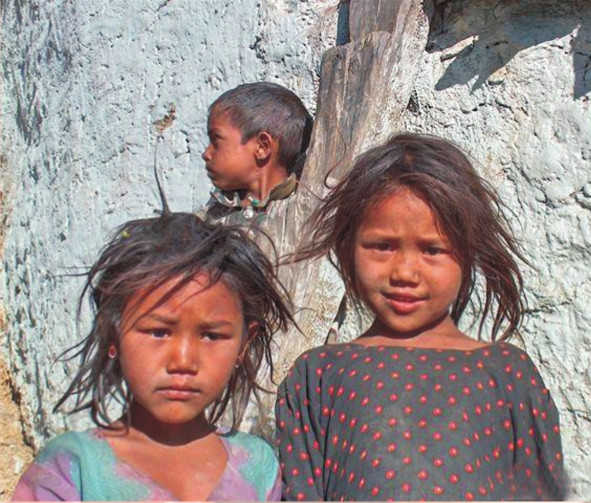 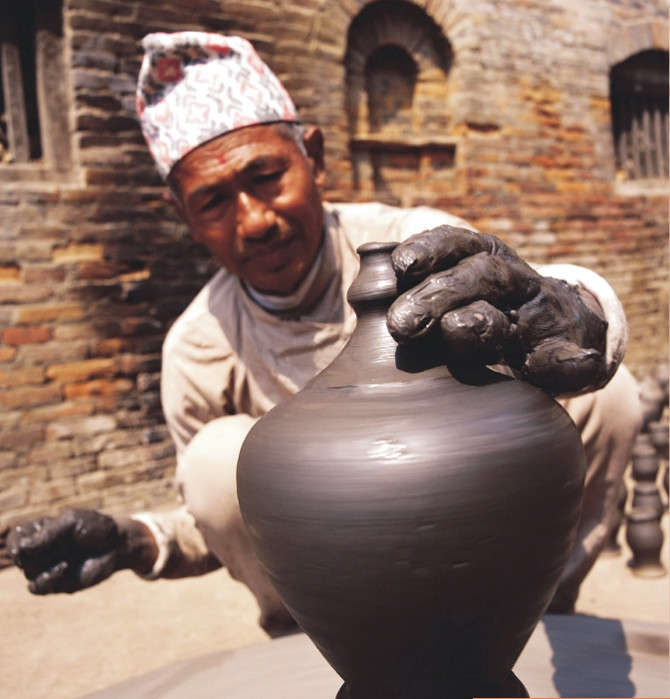 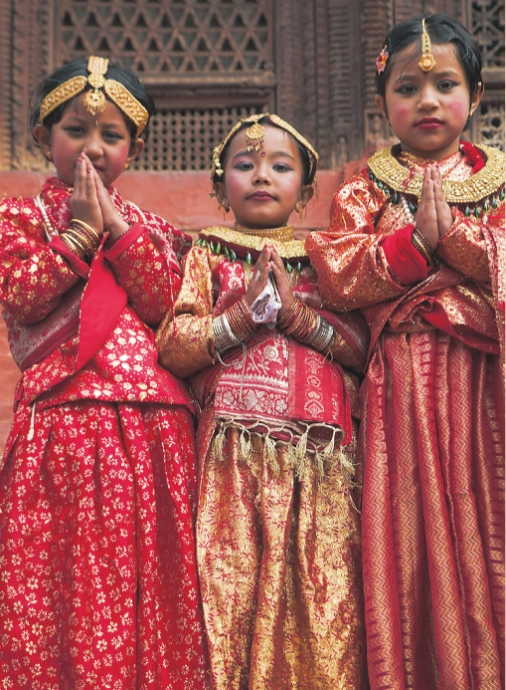 Geography of Nepal is uncommonly diverse. Nepal is commonly divided into three physiographic areas: the Mountain, Hill, Siwalik region and Terai Regions. These ecological belts run east-west and are vertically intersected by Nepal's major, north to south flowing river systems. The southern lowland Plains bordering India are part of the northern rim of the Indo-Gangetic plains. They were formed and are fed by three major rivers: the Kosi, the Narayani, and the Karnali. This region has a hot, humid climate.

Nepal has five climatic zones, broadly corresponding to the altitudes. Nepal experiences five seasons: summer, monsoon, autumn, winter and spring. The Himalaya blocks cold winds from Central Asia in the winter and forms the northern limit of the monsoon wind patterns. In a land once thickly forested, deforestation is a major problem in all regions, which results erosion and degradation of ecosystems.

Nepals population is a mirture of various ethnic, religious and tribal groups. These fall into three main divisions – the Newar, the people who trace their ancestry back to Nepal's earliest known history, the Hindus who came from India during and after the 1200's and the tribes that originated mainly in Tibet and Mongolia. They include the Tamong, Kiranti, Magar, Gurung, and sherpa. The Newar live throughout the extensive kathmandu valley in central Nepal. The gurungs or the Gurkhas, live west of Kathmandu, and the sherpa's, a sturdy mountaineering people live high in the Himalayas. Nepali, Nepal's official language, is an Indian tongue brought in by early Hindu immigrants.

The national dress for men is the daura – Suruwal – a tight legged, baggy – seated drawstring trousers topped by along sleeved tunic closed cloth – ties and a lopsided cap. Worn with a western style suite – coat, it makes the official uniform of high government officials. Among the younger men and city dweller's western style shirts and trousers have become the norm. Among ladies, Hindu women preferred wearing a Sari – a five – meter long length of cloth draped over a tight blouse. The salwar-kurta is popular with the younger women. Nepali women delight in decoration, layering themselves with bright color jewellery. Red is considered the most auspicious and beautiful color, worn by brides on their wedding day as a symbol of marital happiness. Jewellery, more than an adornment is an investment and status symbol.

Similar to other Asian countries, there is a great deal of overlap between art and architecture in Nepal. Both are by tradition, characteristically religious. Grand palaces and beautiful temples include, Hindu Mandirs, Stupas, and Buddhist Shrines. Pagodas, the classic Newari temples are masterpices of majesty and balance, reaching onto the heavens like mountain peaks containing earth and sky. Wood, being found in abundance in Nepal, one can find fantastic wooden carvings in the form of graceful figures of deities or geometric designs, set into the facades of temples, palaces and houses.

Nepali food reflects the cultural diversity of the kingdom and staples vary from boiled rice to chappati to mush. Dal, Bhat, Tarkari, which is a composition of lentil soup, rice and curried vegetables, make the most popular diet in many parts of the country. Kukhura-ko-sekuwa- marinated and roasted chicken cubes, Khasi ko masu- tender goat or chicken meat garnished with aromatic herbs of spice, and machha tareko- fresh fish cooked in herbs are some of the hot favourates. Achar-pickle made from tomatos, peas, or cucumbers seaoned with garlic, chilli, salt. Spice is common feature in the dialy meals of Nepalese households. Tea is the most popular drink, and among the Sherpa, it is taken with salt and butter.

Unglazed red pottery is one of the valleys oldest and most practical products. Clay is transformed into bricks, tiles, flower pots fire pots, ritual masks and various smoking devices. The main production centre is the village of Thimi close to Bhaktapur. Traditional pottery is always unglazed, though a few modern craft production centres now use simple glazes. The famous black pottery of Bhaktapur, gets its glossy finish from carbon, left by the smoke trapped inside the kiln at the end of the firing process. 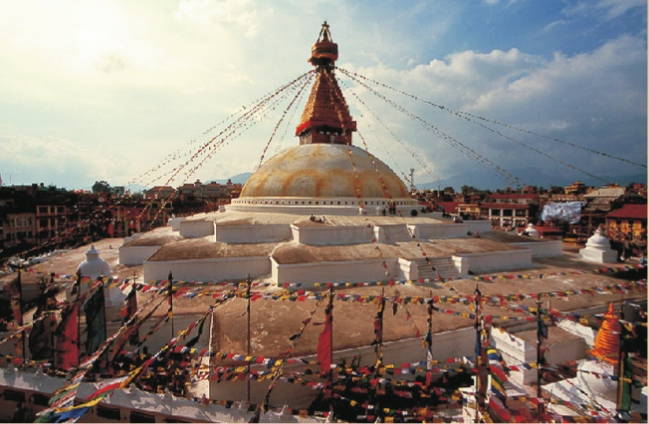 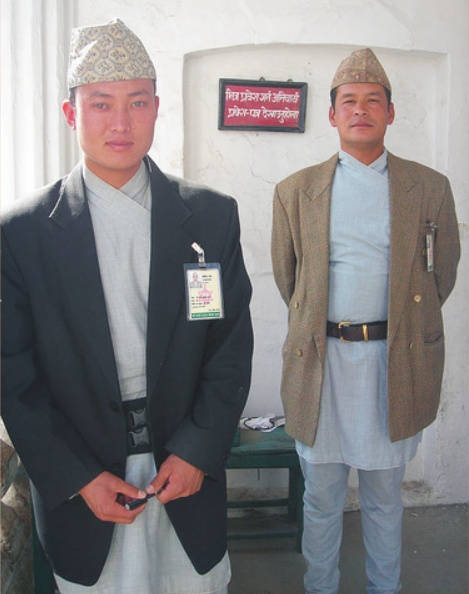 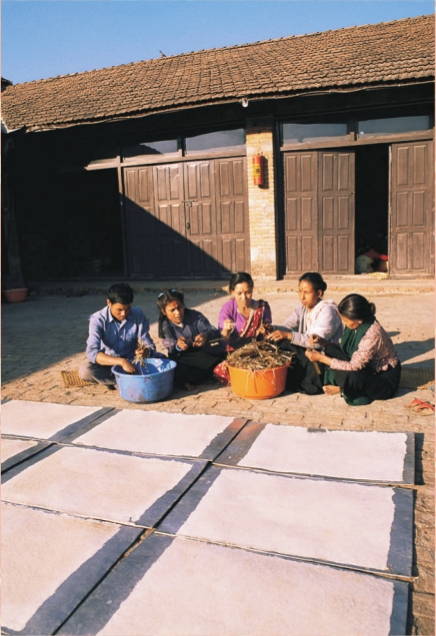 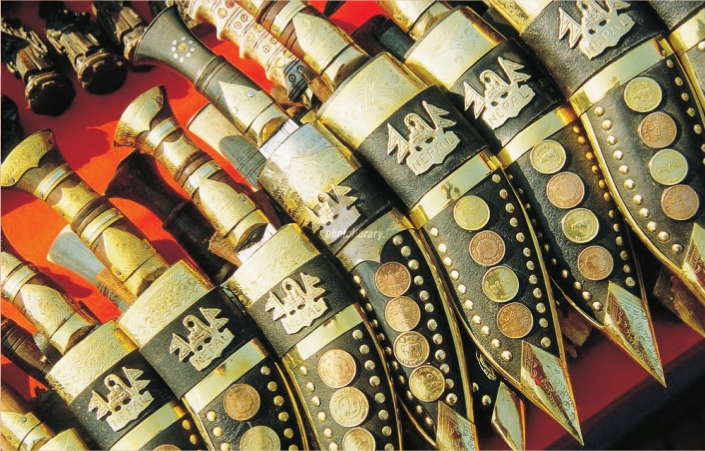 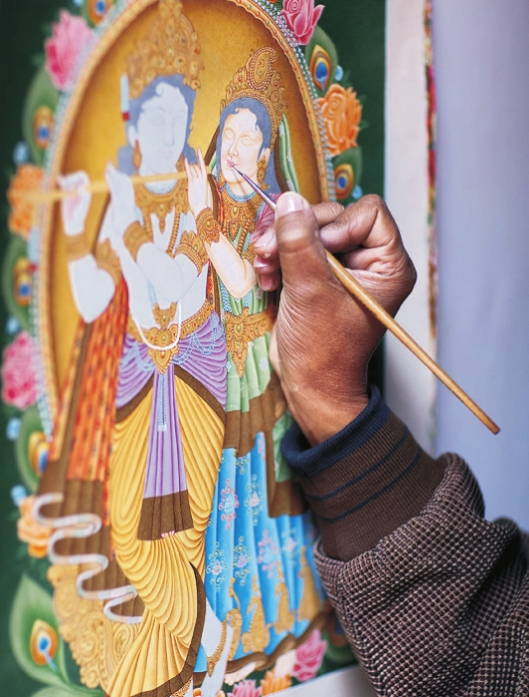 Nepali art is completely symbolic Nepali mwtal work ranks amongst the worlds finest, skilled metal workers produce cast images in gilded copper and bronze, gold and silver ornaments, hammered repousse, relief's for temple facades and accessories like temple- bells, lands, jars etc. Painting rivals metalwork as Nepal's finest art. One charastistic feature of these is that they are devoid of perspective, compressing everything on to one plane regardless of difference in time and space. Paintings are stylized and symbolic rather than realistic, befitting their function of telling a religious story or embodying a deity Thangka, Paubha and Mithila are few styles of Nepali paintings.

Durable handmade Lokta paper, often mistakenly called rice paper”, is produced from the inner fibers of the bark of the Daphne Shrub, a relative of the Birch tree. The Lokta paper is resilient, soft, pleasingly textured and is said to last hundreds of years. Traditionally it was made for religious manuscripts and official documents. Harital another indigenous paper is made from several sheets of white paper glued together and coated with a mixture of rice powder and coated with a mixture of rice powder adhesive and powdered harital, a sulphide mineral ore. When it is dried and polished with a stone or a conch shell a gloss finished can be achieved.

Nepali religious syncretism is epitomized in the tradition of the kumari or living goddess, a young Buddhist Newari girl worshiped as the incarnation of the Hindu goddess, Taleju Bhavani – the mythological protector of king and the people of Nepal. Even the king of Nepal bows before the katmandu's Royal Kumari, for she has the power to confirm his rule for the coming years. The custom, still followed to this day, is for a young girl from the shakya clan to be selected after she fulfills the prescribed requirements. The girl goddess is then settled in 18th century kumari house where she leads a charmed life, until she reaches puberty, then she automatically her divinity and another girl is appointed to take her place.

The wicked, curved Nepali knife has long been famed as the Gurkha soldier's weapon of choice, though it is also forms an indispensable item for the hill men, who use it for other cores. The kukris with elaborate handles of filigree, inlaid bone or carved wood or design on metal sheets are basically more for display than actual use. The genuine item is unembellished and kept in a wooden sheath, It has a notch at the base, for the blood to run off, and two smaller tools fitted in the sheath, used for similar cutting jobs and starting fires. The best kukris come from eastern Nepal, particularly Bhojpur.