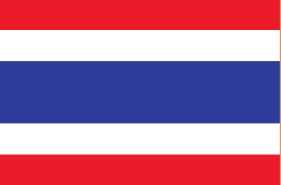 The Kingdom of Thailand is an independent country that lies in the heart of Southeast Asia. It is bordered to the north by Laos and Myanmar, to the east by Laos and Cambodia, to the south by the Gulf of Thailand and Malaysia, and to the west by the Andaman Sea and Myanmar. The capital and largest city of Thailand is Bangkok. It is also the country's center of political, commercial, industrial and cultural activities. Thailand is the world's 51st-largest country in terms of total area, roughly equal in size to Spain, with a surface area of approximately 513,000 km2 (198,000 sq mi), and the 20th most-populous country, with approximately 63 million people. About 75% of the population is ethnically Thai, 14% is of Chinese origin, and 3% is ethnically Malay;[3] the rest belong to minority groups including Mons, Khmers and various hill tribes. The country's official language is Thai. About 95% of the population are Buddhist. 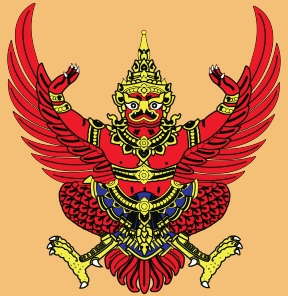 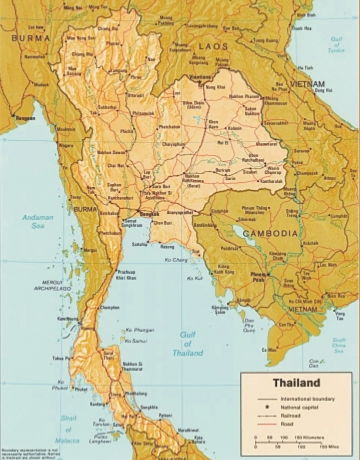 Thailand unites flesh and
blood of Thais. Nation of the
people; belonging to the
Thais in every respect.
Long maintained [has been]
the independence Because
the Thais seek, and love,
unity. Thais are peace-

Loving;
But at war we're no cowards.
Sovereignty will not be
threatened
Sacrificing every drop of
blood for the nation Hail the
nation of Thailand, long last
the victory, Chai Yo (Cheers). 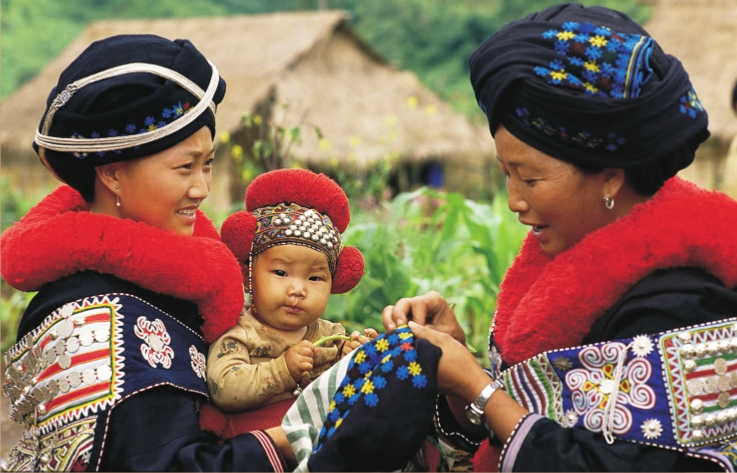 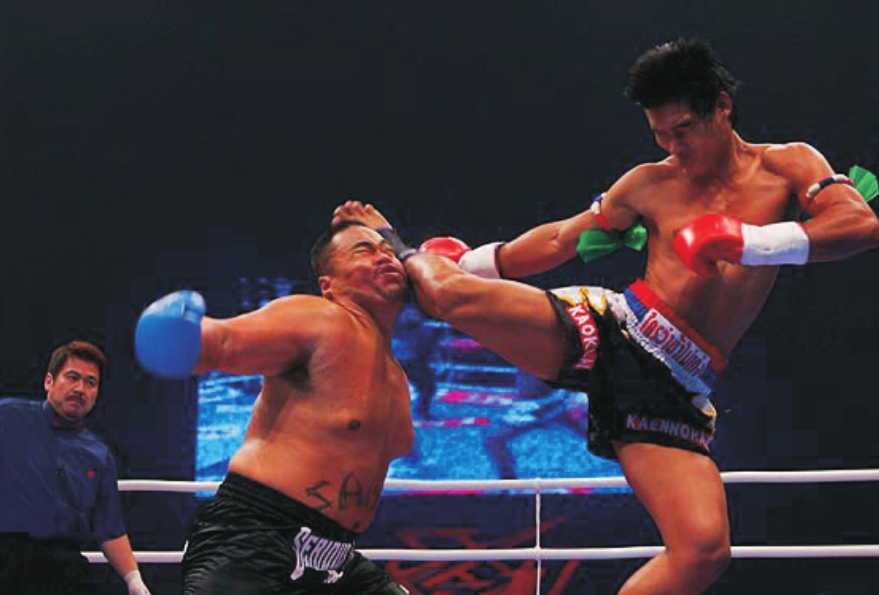 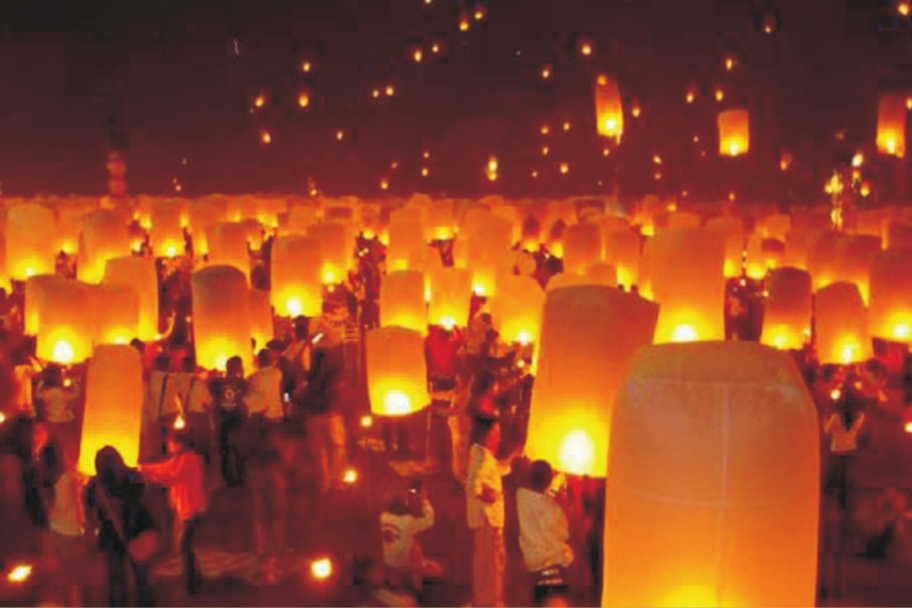 The local climate is tropical and characterized by monsoons. There is a rainy, warm, and cloudy southwest monsoon from mid-May to September, as well as a dry, cool northeast monsoon from November to mid-March. The southern isthmus is always hot and humid.

Thailand is an emerging economy and considered as a Newly Industrialized Country. After enjoying the world's highest growth rate from 1985 to 1996 - averaging 9.4% annually - increased pressure on Thailand's currency, the baht, in 1997, the year in which the economy contracted by 1.9% led to a crisis that uncovered financial sector weaknesses. The Baht was pegged at 25 to the US dollar from 1978 to 1997, however, the baht reached its lowest point of 56 to the US dollar in January 1998 and the economy contracted by 10.8% that year. This collapse prompted the Asian financial crisis.

The Thai, the official language, is complex language with its own unique alphabet. It has words in its original form of monosyllabic type. Each word is independent and complete by itself, the uniqueness of Thai, is that it is tonal. The same word could be pronounced with a rising, falling, high, low or level tone and could theoretically have five different meanings. 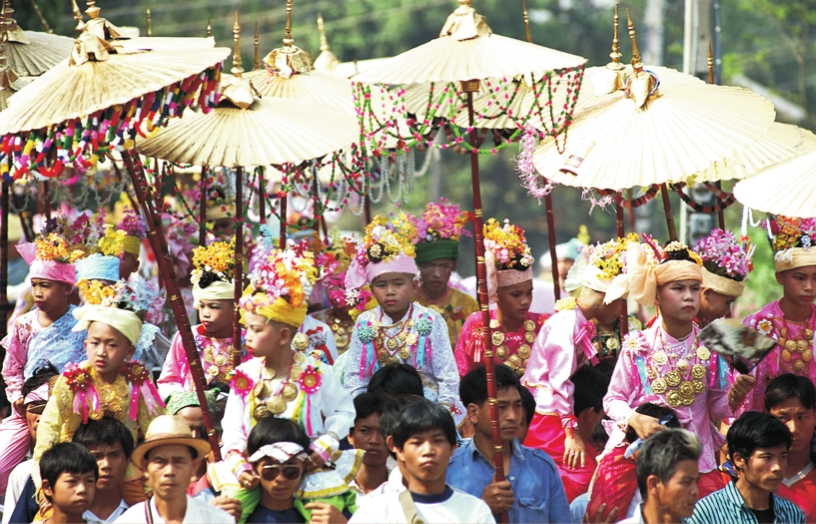 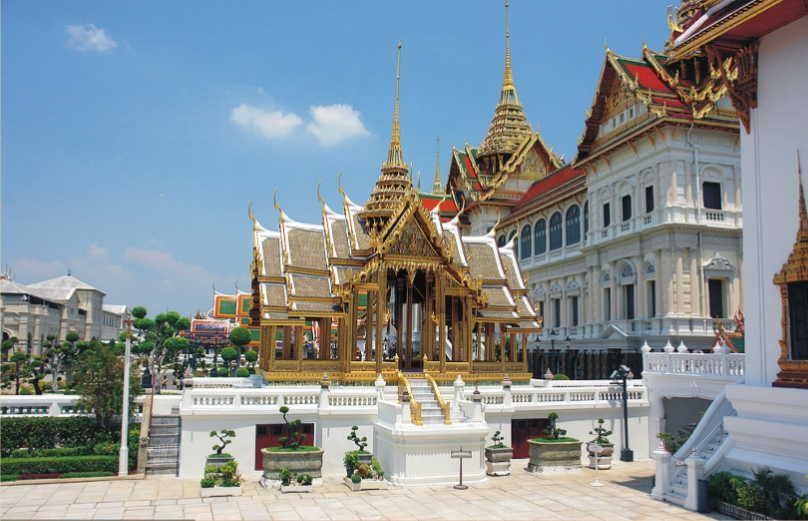 Thaïs are fun loving, sentimental people and have annual festivals, which are both commemorative and those that are celebrated, these play an important role in Thai life. Most Thai festivals are joyous, color events, with music, dancing and funfair, while others are solemn ceremonies of exotic rituals and religious devotion. Festivals are connected either with Buddhism, the annual rice farming cycle or commomerations honouring Thai kings. The majority are confined to one locality. Sonknar, Traditional Thai new year, Lo Karthong where homage is paid to the mother of waters. Yaothon Rocket Festival, ploughing Festival, visakha puja, Magha puja, are insights into the tradition, rites and pageants that have long regulated the lives of people.

Culture has two principal aspects, classical culture and popular or village culture classical culture encompasses Buddhist art as represented in religious architecture, decorative murals and Buddha images. Popular culture was village centered and dealt with planting and harvesting cycles and the basic needs of daily life. Its art included the creation of utensils, clothing and basketry items. The culture of Thailand incorporates a great deal of influence from India, China, Cambodia, and the rest of Southeast Asia. Thailand's national religion Theravada Buddhism is central to modern Thai identity and belief. In practice, Thai Buddhism has evolved over time to include many regional beliefs originating from Hinduism, animism as well as ancestor worship. In areas in the southernmost parts of Thailand, Islam is prevalent. Several different ethnic groups, many of which are marginalized, populate Thailand. Some of these groups overlap into Burma, Laos, Cambodia, and Malaysia and have mediated change between their traditional local culture, national Thai and global cultural influences. Overseas Chinese also form a significant part of Thai society, particularly in and around Bangkok. Their successful integration into Thai society has allowed for this group to hold positions of economic and political power. After World War II, American missionaries sought to win Christian converts in Thailand. Like most Asian cultures, respect towards ancestors is an essential part of Thai spiritual practice. Thais have a strong sense of hospitality and generosity, but also a strong sense of social hierarchy. Seniority is an important concept in Thai culture. Elders have by tradition ruled in family decisions or ceremonies. Older siblings have duties with respect to younger ones.

Thailand is a blend of golden spiked temples, majestic ruins of ancient capitals with the backdrop of high rise buildings. Major religious monuments are richly detailed with Buddhism influenced traditional Thai arts,. Thai temples are ranked among the finest examples of Thai architecture and craftsmanship. Traditional styled houses in the villages are made of wood or bamboo with sloping roofs of thatch or corrugated iron. When located near the water the houses are usually built on stilts. The new public buildings, as well as, private homes, successfully preserve the grace of traditional architectural design while using modern construction materials and techniques.

Thai cuisine, a true gastronomic art, presents an enormous range of dishes and a subtle blend of flavours. It is pungent and spicy, seasoned with garlic and chillies and a characteristic mix of lime juice, lemon grass and fresh coriander, Galauga root, basil, ground peanuts, tamarind juice, ginger and coconut milk are the common additions. Fish sauce or shrimp paste are mainstays of Thai dishes, and rice is eaten with most meals. Main dishes include hot and sour fish ragout, green and red curries, various soups and noodle dishes. Thai food is served with a variety of condiments and dipping sauces and care is taken that every dish is pleasing to both the eyes as well as the palate.

Thailand as indicated by its vernacular name, Prathet Thai, is the land of the free throughout her long history Thailand has gently absorbed immigrants. Many were skilled as writers, painters, dancers, and sculptors and helped enrich the indigenous land people inhabitating Thailand today share a rich ethnic diversity, mainly of Thai, mon, khmer, Laotian, Chinese, Malay, Persian and Indian stock with a result that there is no typically thai physiognomy of physique. Majority of the Thais are connected in some way with agriculture which, in vayring degrees, influences and is influenced by the religious ceremonies and festivals that help make Thailand such a distinctive country. 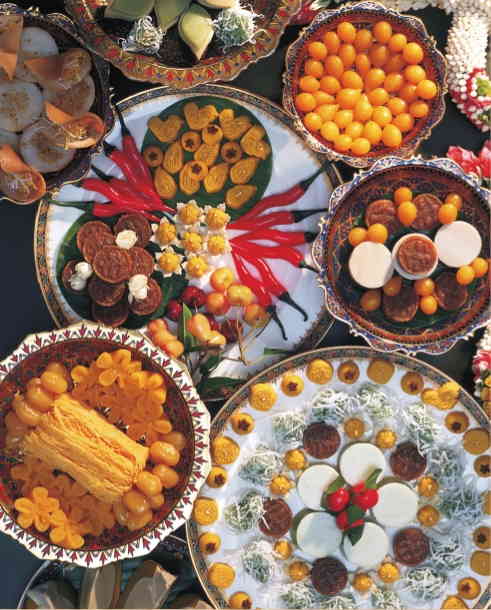 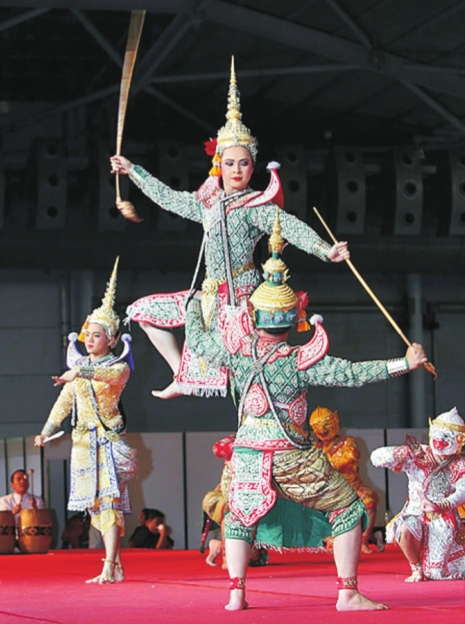 Neon lit discotheques, karaoke bars, the latest dance music with the most modern sound systems, laser lights, vedeos co-exisst with the more tratidional classical and folk dances of Thailand. Khon, the classical masked dance, is accompanied by music played on traditional instruments. Dressed in elaborate costumes and headgear, dancers perform the slow graceful movements that make up the intricate language of stylized classical Thai dance drama. Folk dances, which vary from region to region, are accompanied by music and singing, where the allure syncopated music depends a great deal on the lyrics, and the improvised wit of the participants.

Since ancient times, the Thai kingdom has been a cultural melting pot of rich diversity. Such diversity endures to the present from the sa paper parasols to intricate wood carvings and lacquers ware of chiang mai, the Pak Thong chi silk and the mut mrr patterns of the northeast to the batik and patae cloth of the south, the classical Nang yai shadow puppets to the exquisitely crafted knives and swords of Ayuthaya. Silk or sword, it is the rich colours, textures, and a wide range of natural materials combined with native skills that goes into creating these.