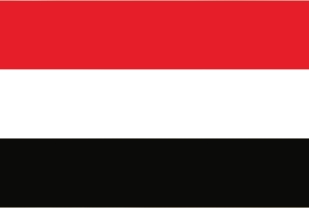 Yemen, officially the Republic of Yemen is a country located on the Arabian Peninsula in Southwest Asia. Yemen has an estimated population of more than 23 million people and is bordered by Saudi Arabia to the North, the Red Sea to the West, the Arabian Sea and Gulf of Aden to the South, and Oman to the east. Yemen's size is just under 530,000 km2, and its territory includes over 200 islands, the largest of which is Socotra, about 415 kilometres (259 miles) to the south of Yemen, off the coast of Somalia. Yemen is the only republic on the Arabian Peninsula. Its capital is Sana'a. In Yemen about 15 % of the population live on less than US$ 1.25 per day. Yemen has three major land regions. A coastal plain called the Tihamah lies along the shore of the Red Sea. In the south along the Gulf of Aden, the plain is mostly sand, with some fertile sports. In Yemen's fertile highland region lies Sana, the capital. Sana is an ancient city – no one knows exactly when it was founded. A long wall encloses Sana and its distinctive buildings and mosques. Eight gates in the wall allow traffic to enter and leave the city. 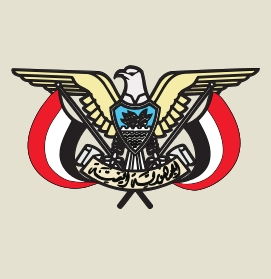 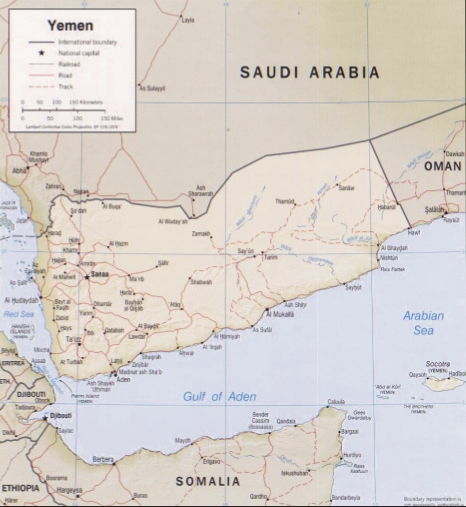 Repeat, O World, my song.
Echo it over and over again.
Remember, through my joy, each march.
Clothe him with the shining mantles
Of our festivals.

Repeat, O World, my song.
In faith and love am I part of mankind.
An Arab am I in all my life.
My heart beats in tune with Yemen.
No foreigner shall dominate over Yemen. 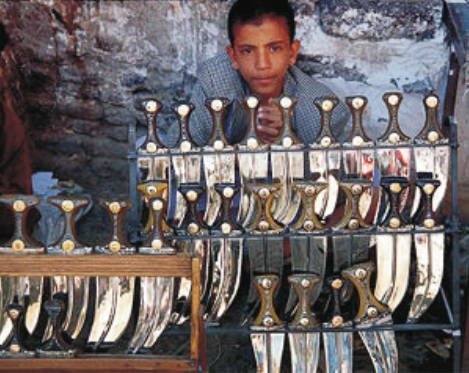 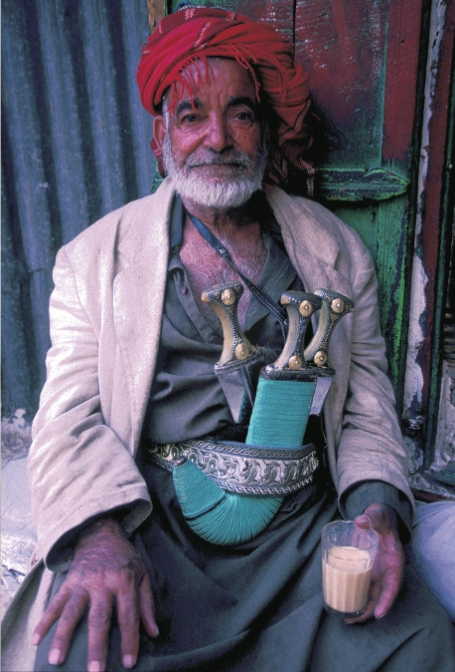 A man with Three Jambiyas 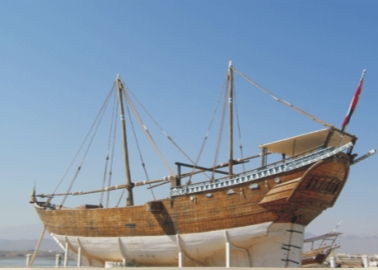 In ancient times, Yemen was known as 'Arabia Fellix' or 'fortunate Arabia' a land of frankin cence and myrrh, which yielded highly valued incence and perfumes, yemen also lay along important trade routes between Europe, Asia, and Africa. But the regions prosperity ended when Yemeni tribes and religious groups fought with one another as well as would be invaders. The most important cultural and political event in the history of the region occurred in the 600's when Islam was introduced to the people.

Most of the people of Yemen are Arab Muslims, but they belong to different tribes and different religious sects. Small groups of Indians, Pakistanis, and Africans also live in Yemen.

Most of Yemen's people are farmers of herders. Some make their living by fishing in coastal water. The basic foods of Yemen's people are rice, bread, vegetables, lamb, and fish. A spicy stew called salta is the national dish. Traditional Arab clothing is common in rural areas. The men's garments include cotton breeches or a striped futa (kitlt). Many men wear skullcaps; turbans; or tall, round hats called tarbooshes. Yemeni craft workers have been noted for their textiles, leatherwork, and ironwork since ancient times, and many such goods are still made by hand. Yemenis dye and weave beautiful cloth and make rope, glassware, wooden chests, jambiyas (daggers), jewelry, brassware, harnesses, saddles, and pottery. A jambiya salesman displays his wares In the past, the kind of jambiya a man owned and the position in which it was worn indicated the tribe to which he belonged.

Lunch is the main meal of the day in Yemen. The basic diet being rice, bread, vegetables, lamb and fish. Salta is a spicy stew of lamb or chicken, lentils, chickpeas, herbs and spices are served on rice and is a national dish. Marisa porridge made from sorghum and dates and shubra a thick broth of lentils, lamb and fenugreek are the main stay of a Yemeni kitchen. The most popular drink is shay mint flavored tea and coffee. Which is served sweet with ginger and other spices. 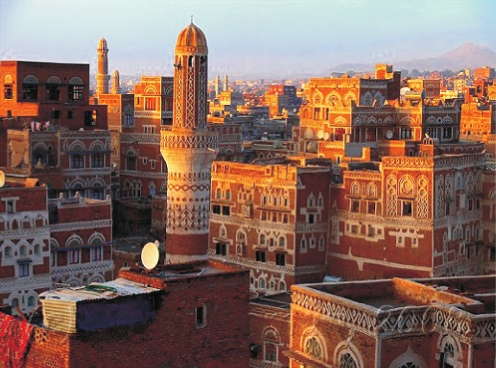 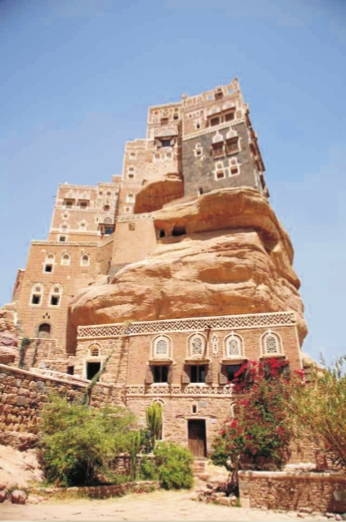 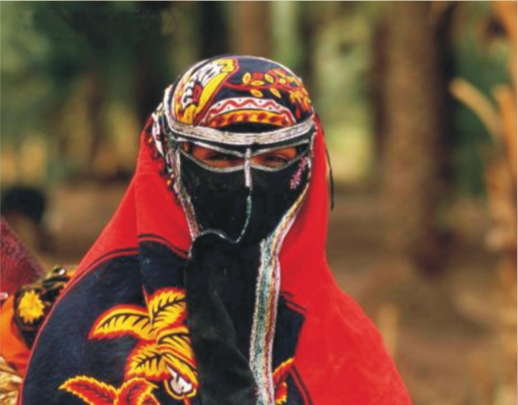 Many Yemenis wear western style clothing in urban areas but traditional attire is still preferred. The traditional dress for men is a Knee Length robe, worn with breeches or with Futa- Kilts. The Jambiya curved dragger is proudly thrust in an embroidered leather belt worn around the waist. The kind of Jambia a man owns and the position in which it was worn indicated his social status and the tribe to which he belong. Yemeni men cover their heads with brightly coloured turbans or Tarbooshes – tight fitting caps embroidered with gold or silver. In the cities the women are wrapped from head to toes in big shawls or shapeless robes and are heavily veiled outside their home. The veils are often embroidered with silver.

Owing to their marine past boat building has been part of Yemens history. The Fabled Noah's Ark is said to have been built at Aden. The traditional sambug dugont canoes are still used in shallow waters, to spear fish, while single A Built Dhow sailed 'dhows' ply in deeper waters. The sturdy dhows are even built today by time tested methods of oak ribs, benteak, caulking cotton, date juice and coconut and sesame oil.

Khat or kat chewing is a part of everyday Yemeni life. Khat, a woody highland shrub whose leaves are chewed is a leading cash crop of Yemen today. Group of men and women often meet separately in the afternoons or evening to chew khat leaves. When chewed, khat leaves produce a stimulant that has a mildly intoxicating feeling of well being.

Traditional Yemeni architecture is distinctive as it is astonishing. The tall multi storied mud brick skyscrapers in the ancient cities of Sana, Shibam, Aden, Seem to grow out of the land itself. The reddish external walls are adorned with white trim plaster while the doors and windows are decorated with delicately designed tracery a perfect example of Yemeni taste and talent. The internal walls of many buildings – religious and non religious, come alive with frascoes, mosaics and stained glass. Islamic decorations being an integral part of ancient Yemeni architecture. In urban cities people live in modern western style apartments or houses, yet farm families living in towns like sayun, still prefer mud brick houses three or four storeys high.